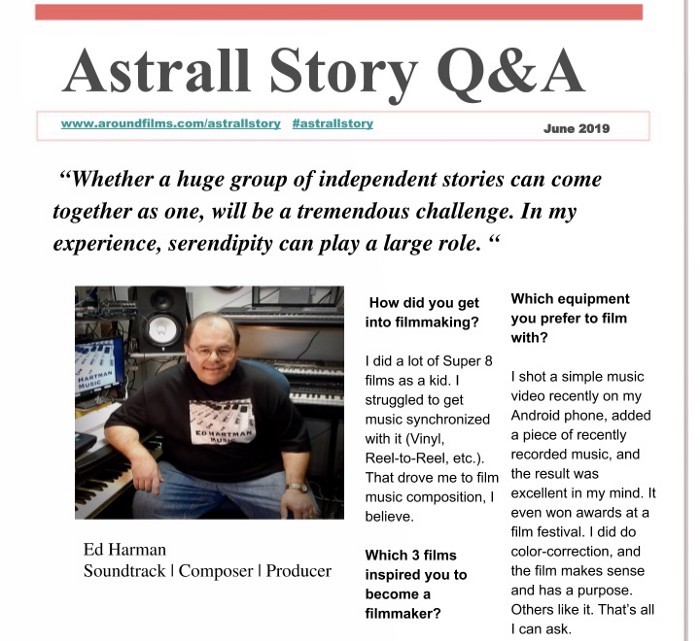 I did a lot of Super 8 films as a kid. I struggled to get music synchronized with it (Vinyl, Reel-to-Reel, etc.). That drove me to film music composition, I believe.

Which 3 films inspired you to become a filmmaker?

As a composer/producer (and a bit of a filmmaker), 2001, Close Encounters of the Third Kind, and It’s a Mad, Mad, Mad, Mad World.

Which equipment do you prefer to film with?

I shot a simple music video recently on my Android phone, added a piece of recently recorded music, and the result was excellent in my mind. It even won awards at a film festival. I did do color-correction, and the film makes sense and has a purpose. Others like it. That’s all I can ask.

What are the main qualifications of a successful Co-producer?

I did restore the film, edit it a bit (found lost footage), do post-production, including music. We have promoted this film in many festivals, created PR (Stills, Press Kits, other assets (mini-docs, festival video introductions), etc. If a co-producer is involved in the festival promotion, it can become a full-time job submitting, monitoring, handling selections, screenings, file transfer, posters, postcards, with festivals, etc.

For our film (currently in 78 festivals), keeping track of all of the awards, nominations (IMDB updates) can be a daily task over the festival run (at least 12 months!)

What’s your approach to Dogme 95 and how do you feel about creating Dogme 2020 manifesto?

I find it fascinating that modern audiences forgive the primitive effects, and completely buy into the story. Fantasy can be extremely strong in the audience. They want to believe the images and sounds are real. The drama of the script and acting make or break a film. The musical score creates a tremendous amount of emotion to a scene. Watch nearly any film, take away the music, and you may lose 50% of the scene.

For my film being silent, music is the entire sound-score. I can say that there are two tremendously emotional scenes in the film. One is when they see snow in July, and the other is the ending. I can pin-point the moments that still give me chills as a composer. I do think that Dogme 95 or 2020 will always wrestle with what level of technology, effects, etc. is too much. I think the point will always be priorities. Good story, good acting, good solid production equals a good movie.

I’ve seen collaborative efforts before. It will probably have a “stream of consciousness” to it. Editing will be the deciding factor, in my opinion. I believe Richard Lyford would love the creative element and would want to have participated. His film, “As the Earth Turns” is all about world peace. He spent a lot of his filmmaking career doing documentaries about a wide variety of subjects. Many were day-to-day living issues (farmers, railroads, etc.). Walt Disney spoke of Lyford as a tremendous storyteller.

Almost anything can be made into a story. Whether a huge group of independent stories can come together as one, will be a tremendous challenge. I can say that, in my experience, serendipity can play a large role. The overall direction will be challenged to find that common ground from all of the stories.

Regarding your experience, can you give 3 keywords that ARFF International provides to the filmmakers?